REVIEW: 5 Ways to Get Extra Cash For The Holidays 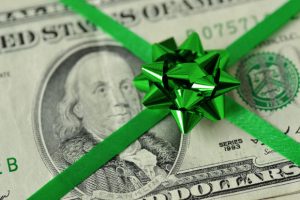 It’s that time of year again. The time for holiday parties, gifts, festive decor, spending time with family members who you really don’t give a sh*t about and, well, spending… spending money on them because you don’t want them to know the truth of how you REALLY feel about them, because if they did know how you really felt about them, and you got caught placating them, you would just end up feeling like a hypocrite.

But, if you’re an arrogant, narcissistic jackass, you really won’t care, will you?

According to the National Retail Federation, the typical American will spend over $800 this holiday season — on gifts, holiday items and other non-essential purchases for people they don’t like. They’ll do this because they want all their asshole relatives and friends to think that they’re “Big Dogs” and going into debt, and paying 24.99% API on their credit cards is the only way they can impress their friends and family members.

I just say, do like Ebenezer Scrooge and give them a big BAH HUMBUG!

Don’t have that kind of money? Just need some extra funds for gifts and other holiday spending? Or do you just want to make some FU money so you can move to the English countryside where all your ‘needy-grabby’ relatives can’t come out of the woodwork to find you?

Here are just a few ways to get cash this holiday season.

Here’s just a short list of 5 ways to get extra cash for the holidays (but you’re REALLY not going to like them):

There are multiple ways to access EXISTING cash – and earn more – this holiday season. Here are five ways you can start.

Yeah, right! Like that ever worked! If you’re willing to spend hours on end each day filling out forms and giving your opinion (which nobody gives a shit about anyway), then knock yourself out with online surveys.

You won’t get rich taking surveys and it’s not meant to take the place of a full-time job. Hell, you probably won’t make any money taking surveys, either, because once you begin to feel like the dolt you are, you’ll give up and throw in the towel and ask yourself the question, “What the hell was I thinking to get into this ‘hair-brain’ idea?”

Paid surveys are NOT going to make you any money. They’re going to cost you more in time than they’re worth. If you’re making minimum wage flipping burgers at McDonalds, you’d be doing better than making pennies on paid surveys.

If you really need cash and are willing to take on debt for it… DON’T!

Personal loans is NOT a good option. The interest rates are ridiculous, confiscatory, dishonest, and in some cases downright illegal. And besides the aforementioned, they’re immoral… but that’s a subject for another conversation.

When it comes to personal loans, you might think about getting that dead-beat who owes you $800 to pay you back. You know the one: the one who has owed you for over 4 years now, and you’ve been nice enough to “let it ride” without charging interest?

They want to keep chirping that they’re going to pay you back, or you’re on the top of their list (of unpaid loans), and you’ll be the first one to get paid… all the while they’re talking about leaving the country as soon as they can afford to…

Don’t hold your breath on that one either. And don’t loan people money, because you’ll never see it again.

3.) Cash-out your life insurance policy (or take a loan against it)

If I ever heard of the ultimate hair-brain idea, it’s this one: if you have a life insurance policy, you may be able to use that as a source of cash. Some types of life insurance plans let you withdraw from your policy’s cash value or even borrow against it with a loan.

Did you just hear what I said? “Borrow against it?” Hell! It’s your f*cking money! Why would you put yourself in debt to borrow against your own money and have to pay interest on it?

If you do this, just note that it will mean a smaller payout for your beneficiaries if you pass away before paying it back. As a matter of fact, this probably sounds like a good idea. Take all the cash value, and screw the payback, and let the grifters on your list of beneficiaries learn to fend for themselves.

Okay, this one really “torqued” my nuts. Do you own a home? A cash-out refinance could help with your cash flow. With this strategy, you take out a new, larger mortgage loan, pay off your old one, and keep the difference in cash. You can then use that money however you’d like — for gifts, repairing your roof, taking a vacation, etc.

Then after you die, and you couldn’t pay off the balance of the debt, you could leave the balance for your ne’er-do-well relatives who were just waiting for you to croak. And while you’re at it, that niece that wants your prized 1972 Ford Gran Torino? Put it in your last will and testament for someone who’s not even related to you. That’ll really bugger their knickers in a knot!

I still haven’t figured out if this is the greatest rip-off (as in scam) or not. I still can’t figure out why Tom Selleck is pimping that crap in commercials… but it just might be because he’s not the buff he used to be when Magnum was hopping out of his car in “tightie whities”…

I don’t know enough about reverse mortgages to say either way, so you’re on your own.

Frankly, I like the idea of “van lifers” and living on the road, and having an apartment as a “home base”. That way, I don’t have to argue with the utility companies and the appraisal district when I get into a tax dispute with the bastards. I also don’t have to rake the leaves in my yard to keep the HOA from giving my property the “stink eye” every time they walk their dogs past my front yard.

Yeah, you know who you are. Curb your dogs and let ’em poop in your own yard, or pick up your dog’s sh*t off my lawn. I leave the leaves there for a reason: I’m paying someone else to rake them up!

I know the title said “5 Ways…” but I just thought of a 6th option.

There are other ways to make extra cash, not only for the holidays, but for the long haul, too.

You could start your own blog, but if you don’t know what you’re doing, or your writing skills are crap, then maybe you should stick with that job flipping burgers and fries.

You could sign up for a gig-work on social media sites. Hell, if you’re reading this, and you’re messing around on Facebook, Twitter, YouTube, or LinkedIn, then you could actually get paid to become a virtual assistant.

You could also cut back on expenses, cancel subscriptions or change your insurance providers. I personally know some really fine people who could help you save money, free up cash flow, and help you with your wealth management as well. They might even be reading this article… just sayin’…

When will I ever STFU you ask?

You have a business that you want to grow?

But you want a business that you can do from your dining room table?

It’s really your only realistic and viable solution.

The first 5 were only to whet your curiosity.

REVIEW: 12 Ways You Can Make Money Online Without Selling Anything

Are You Posting Photos and Memes On Facebook? Why Not Get Paid!

REVIEW: 5 Ways to Get Extra Cash For The Holidays

REVIEW: 12 Ways You Can Make Money Online Without Selling Anything

Are You Posting Photos and Memes On Facebook? Why Not Get Paid!